The Farm Journal Foundation’s HungerU program launched a two-year engagement at the Voice of the Farmer Garden on the National Mall. The launch event, which included remarks from U.S. Department of Agriculture Under Secretary for Marketing and Regulatory Programs Greg Ibach and Under Secretary for Farm Production and Conservation Bill Northey, featured a panel of agricultural industry leaders with CEO Jon Doggett representing the National Corn Growers Association.

“While NCGA continues to support the HungerU tour of universities and proudly partners to further this strategic communications activity, the new partnership bringing the story of modern agriculture to the edge of the National Mall elevates our conversation substantially,” said Doggett. “Today begins a new chapter. We will initiate open, transparent conversations about sustainability and farming with millions in our nation’s capital, building trust that closes the distance between the farm gate and the dinner plate.”

In addition to Doggett, Consumer Engagement Action Team Vice Chair Debbie Borg participated in the launch, showing the support of the team which launched the partnership with HungerU in 2017.

Through this partnership, formalized in an agreement with USDA’s Agricultural Marketing Service, HungerU provides educational content to tourists and groups passing through the People's Garden during high traffic times through a kiosk in the USDA Farmer's Market that takes place each Friday from May 3 through October 25. 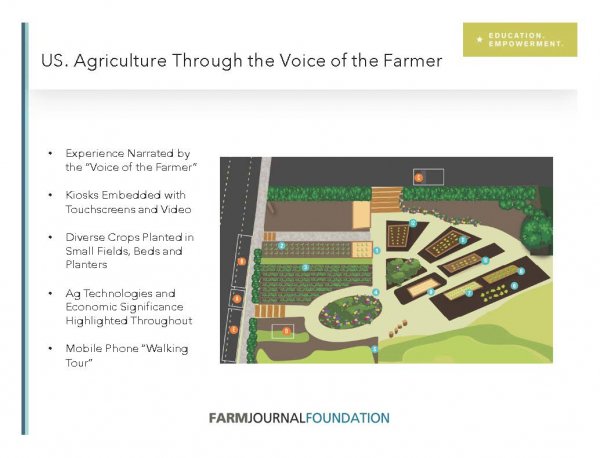 In the past, Michelle Obama spearheaded this garden, formerly referred to as the People’s Garden. as an organic-centric garden. This program repositions the garden as an experience for people to learn about the role of modern agriculture in feeding the world through the voice of farmers. Additionally, eLearning modules and a walking tour microsite showcase positive information about farming technology and sustainability. Notably, the garden and aforementioned content will be available to all of the 24 million people who pass through this cultural and governmental center every year.

In addition to the Friday Farmer's Market, HungerU will be present at events that take place throughout the year, such as the Folk Life Festival and USDA Farm Days. Partnering with groups like FFA, 4H, local high schools and others in the area, food grown will be harvested and delivered food to regional foodbanks.

The fall HungerU Tour of leading universities will continue, with Ambassadors traveling Monday through Thursday to campuses in the Mid-Atlantic and East Coast.